The “Villa of Chiosi” was constructed during the last years of the seventeenth century by the brothers Carlo and Francesco Dosi, two rich business men who had found in Pontremoli an ideal place where the trade among the Leghorn harbor and the Po Valley (italian: Pianura Padana) were flourishing .

The history of the mansion is tied to the history of the Dosi family, which has always been connected to this place, from its construction to the present day: it went through periods of splendor ,neglect, and finally restoration, through which we can admire today the Villa in all of its glory.

History of the Dosi family 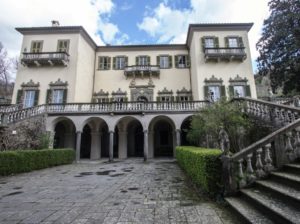 The first historic information about the Dosi family are related to the pledge of allegiance that was made in Modena in 1168 by some family members and to their participation to conflicts for territorial supremacy, which took place in that city during the XII and the XIV centuries. Then, the family moved to Bologna and later to Belgioso in the province of Pavia; in 1496, a Guglielmo moved to Pontremoli as a commander of the Sforzesco Castle of Piagnaro.

In the following decades, the Dosi family began a lucrative trading activity between Pontremoli, Leghorn and Piacenza and in a short period of time, they reached a remarkable welfare.

In the meantime, through cautious wedding politics, the family tied itself to the most important local houses. The full recognition of the family in Pontremoli happened at the end of the first half of the XVII century, when Carlo’s son, Nicolò Dosi (1619-1669) was admitted to the General Council of Pontremoli.

During the last decade of the seventeenth century, the heirs -Carlo and Francesco- of the rich merchant Nicolò Dosi, built and decorated the so called “house of Chiosi”. Upon entering the Villa, the visitors can observe the two brothers accompanied by the family’s coat of arms (a stork, a tower and two dolphins) and by cartouches -ornate frames- that reports the date 1700, when the house was constructed. The idea and the project of the Villa are related to the figure of Carlo Dosi, a man of vast culture, lover of art, architecture and gardening, who -for the decoration of his house- chose among some of the most famous artists of that period, such as the architect and decorator Francesco Natali and the painter Alessandro Gherardini.

In 1724, Carlo Dosi died and the interests of the family were conducted by his son, Giuseppe Antonio Dosi (1679-1769) with great initiative, though he moved his interests and his financial resources into the construction of the city palace. In these years, Giuseppe Antonio focused on policy and affairs, in order to occupy a more influential social position, becoming marquise in 1733.

With the next generation, the family’s descent began : the economic conditions in Pontremoli were adverse, and the heirs faced hereditary issues. These dynamics lead not only to the division of the property and of the villa, but also to a patrimonial crisis inthe family. The abandonment of the house the day after the French Revolution represents the acme of this sequence of events. During the XIX century and the XX century, the fortunes of the family started to rise again, thanks to figures such asthe one of Gian Simone (1790-1854) and of Gian Carlo (1824-1915), who is remembered because he presented to the King Vittorio Emanuele II (with other important people, such as the composer Giuseppe Verdi), the results of the plebiscite for the annexation of the Duchy of Parma and Piacenza to the Kingdom of Piedmont, which rapidly became the Kingdom of Italy.
Gian Carlo’s son Andrea (1863-1924)was also among those contributing to the family’s rise.

History of the Villa 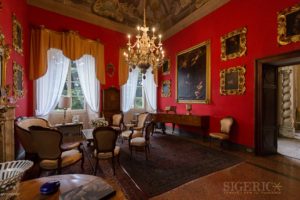 The visitors are welcomed by the two busts of Carlo and Francesco Dosi, located above the main portal of the edifice; they were the creators and principals of the mansion. From the cartouches located under the portraits of the two brothers, we learn that the mansion was constructed in 1700.

Actually, the date, has to be considered as an indicative one: some documents and testaments of the family that have been recently analyzed, lead us to believe that the idea for the project of the mansion had already been made around 1660-70. From the documents it appears that in 1693 the Dosi Villa, defined as “fabric” and “palace with garden”, was already covered and that there were people who provided it with statues and decorations.

On one hand, we know with certainty the names and the roles of the people who wanted to construct the Dosi Villa. On the other hand, we had no information about the identity of the architect who designed it or about the workforces who realized it. Francesco Natali, the architect and painter from Cremona who studied at Bibiena school, and Alessandro Gherardini, a famed artist from Tuscany who was very active in Pontremoli, were invited to execute the decorations for the internal spaces. These decorations are generally assigned to Natali; they feature the typical architectural views which will become a stylistic hallmark of Pontremoli’s Baroque during all the first half of the XVIII century.

The paternity of the frescos inthe main hall is assigned to Gherardini. These frescos however are, unfortunately, largely lost. While Alessandro Gherardini worked at the Dosi Villa between 1697 and 1700, Francesco Natali worked there for the first time in 1697, remaining involved for a decade.

The family tradition ascribes to Natali also the plan of the bridge and of the Chiosi chapel. Here, an epigraph testifies that the bridge was erected by Carlo Dosi in 1705 “ad solum proprium usum eiusque heredum” (reserved only for him and the heirs.)

Completely abandoned during the years of French Revolution, the Dosi Villa was progressively recovered beginning in 1814 and is still object of restoration today.

“Those 30 years of abandon have left indelible traces on the frescos of the hall, which are in large measure irretrievably lost, are furniture, decors, doors, statues and even the big front gate, that was replaced in the XIX century.”

This is what Pier Andrea Dosi Delfini writes in one of his diaries. Slowly, the family redecorate the house, frequently buying (or buying back) paintings, furniture, lamps from other families of Pontremoli or through a careful search on the antique markets. During the Second World War, the Villa was subject of multiple raids by the Allied forces in order to find a German command that was guarding a cannon in the nearby rail tunnel. Clear signs of such bombardments, which damaged the mansion, still exist inside the hall.

Old statues, tall trees (magnolie and holm oak) and numerous lemon trees decorates the south side rooftop garden of the Villa. Above, there is a panoramic viewpoint which offers a marvelous view of the house and of the surrounding landscape.

The Lebanese cedars are very impressive. Imagined as a place for social events according to the taste of the Baroque time, the Villa represents the spirit of its time at its best, through a surprising interweaving of nature, architecture, artistic decorations and fine furniture. The building develops on a hillside and it is constituted by a central block that comes in the shape of an “H” which is flanked by two roof gardens and framed by terraced vineyards. In 1988 The Villa was recognized as a place of significant historic and artistic interest. It is from here that the innumerable restorations started in 1991-1993 thanks to which today we can now admire this extraordinary site.

To discover more about the great hall and the rooms, click here! 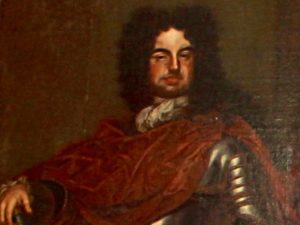 The duke of Parma and Piacenza Francesco Farnese and his wife Dorotea Sofia di Neoburgo visited the Villa in 1714:theywere returning back home to Parma, after having accompanied their daughter on the journey to Madrid, where she had been arranged to marry the emperor of Spain Philip V.

In fact, the Duke intended to Pontremoli with the express purpose of seeing the Villa of Chiosi himself. The villa hosted them and their following. The stay of these eminent visitors is narrated in the chronicles of the Villa: “They arrived at the Villa on Friday, September 28, followed by dames, knights, page boys, assistant, carbineer, a stable with 150 horses and the rest of the family”.

The account of this important visit offers us an interesting cross section about customs of the eighteenth century.

The heirs of Farnese Dukes (more precisely, Elisabetta’s son, will honor with the title of marquise the Dosi Delfini family members).

X This site and selected third parties use cookies or similar technologies for technical purposes and, with your consent, also for other purposes as specified in the cookie policy. You can freely give, refuse or withdraw your consent at any time. You can consent to the use of these technologies by using the "Accept all" button or refuse or choose which categories of cookies to allow.
Cookie SettingsAccept allReject allPrivacy Policy
Manage Consent

This website uses cookies to improve your experience while you navigate through the website. Out of these, the cookies that are categorized as necessary are stored on your browser as they are essential for the working of basic functionalities of the website. We also use third-party cookies that help us analyze and understand how you use this website. These cookies will be stored in your browser only with your consent. You also have the option to opt-out of these cookies. But opting out of some of these cookies may affect your browsing experience.
Necessary Always Enabled
Necessary cookies are absolutely essential for the website to function properly. These cookies ensure basic functionalities and security features of the website, anonymously.
Functional
Functional cookies help to perform certain functionalities like sharing the content of the website on social media platforms, collect feedbacks, and other third-party features.
Performance
Performance cookies are used to understand and analyze the key performance indexes of the website which helps in delivering a better user experience for the visitors
Analytics
Analytical cookies are used to understand how visitors interact with the website. These cookies help provide information on metrics the number of visitors, bounce rate, traffic source, etc.
Advertisement
Advertisement cookies are used to provide visitors with relevant ads and marketing campaigns. These cookies track visitors across websites and collect information to provide customized ads.
Others
Other uncategorized cookies are those that are being analyzed and have not been classified into a category as yet.
SAVE & ACCEPT