The “Chiosi” tree-lined road and the entrance to the mansion. 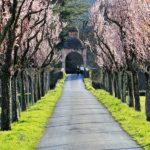 “Dosi Delfini” Villa is located a few hundred meters away from the old town of Pontremoli (MS), in the so called “I Chiosi “ locality , along the Verde stream.

It is possible to reach the mansion with a nice walk along an evocative tree-lined road (framed by colorful prunus and lagerstroemia trees) which ends in a stone bridge that was built as entrance to the villa in 1705 and is surmounted by an elegant chapel.

Once one crosses the gate, onecan stop for a while to admire the two majestic Lebanese cedars, planted in 1867 when the great-grandfather of the current owner was born. Nowadays, the cedar trees partially hide the façade of the mansion. When we arrive in front of the sober and harmonious façade, reminiscent of the Renaissance “Ville Medicee”, we may climb the matching stairways leading to the great hall through a stone portal, adorned with the busts of the two brothers Carlo and Francesco Dosi (dubbed “the fogeys”) and with the family’s coat of arms. 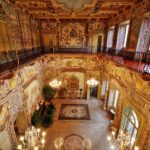 The vast double level hall, wrapped in an elegant wrought iron gallery, can be considered as the heart of the building: here, an impressive pictorial decoration fills up all the surfaces with paintings, perspective effects, allegoric scenes and lavish decorations. The frescos were made by the artists Francesco Natali and Alessandro Gherardini around 1700. Among the innumerable painted architectural elements that expand and transform the perception of the space, on the walls of the room is still possible to recognize the figures of the Parcae, the head of a poet crowned with laurel, some allegoric figures, a Madonna Enthroned and a man, who sends away the war, the dove with an olive branch, which represents the peace and the cornucopia, the symbol of abundance.
Natali’s architectural paintings will become a stylistic hallmark of Pontremoli’s Baroque throughout all of the first half of the XVIII century. Inside the great hall, we can notice a characteristic sedan-chair and an extraordinary consolle of the eighteenth century created specifically for the mansion by the famous woodcarver from Belluno: Andrea Brustolon, called “The Michelangelo of wood”.  Next to the consolle is the portrait of Giulia Righini, Carlo Dosi’s wife. When she died in 1713, he retired to a monastery.

The rooms of the main floor 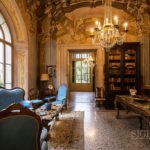 Around the hall you can find nine rooms, all frescoed and furnished in a traditional style with paintings, libraries and sofas: the red hall, the billiard room, the portrait room, the library, the private chapel of the family, the dining room, the nineteenth-century hall and the bedrooms. Every space and every object tells us stories and curiosities of a sophisticated, cultured world which was attentive to details in order to amaze and astonish the family’s guests. 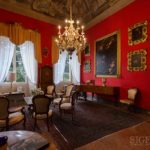 The family used to meet in the sitting room to amuse themselves, playing and listening to the harpsichord, situated under a beautiful canvas of Francesco Cairo dedicated to Saint Joseph. Inside of the room, there are various artworks from Napoli, not only paintings but also objects of decor like the stunning ceramic chandelier from Capodimonte Gallery. On the walls, there are portraits of the Farnese Dukes, who visited the villa in 1713. 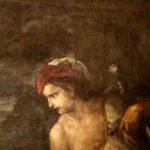 Here are preserved the most valuable paintings of the entire collections: a David with Goliath’s head, a Holy Allegory and a portrait of Dying Seneca.
The three big canvases, two of which belong to the Florentine school and the other one to the Neapolitan one, are assigned to famous artists: Francesco Furini, Alessandro Gherardini and Luca Giordano. On the walls there are portraits of some hallowed clerics from the Dosi family. 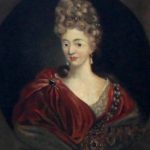 A proper family tree is painted on the walls and it depicts the most important members of the family: Carlo Dosi next to his wife Giulia Righini, Carlo’s brother Francesco, the parents ,their sons and their grandchildren. 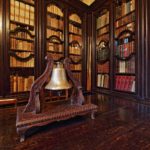 The well-stocked library, which is split among multiple halls of the main floor and of the upper floor, counts thousands of volumes such as manuals, first editions, old documents, a lot of which have yet to be studied. The library is a first proof of the cultural and literary interests of the Dosi family, who were wise collectors and benefactors.

Inside of the Villa there is a small consecrated chapel, reserved for private functions. Among the decorations there is also a painting realized by Andrea Vaccaro, student of Cavallino. The painting depicts a Dying Saint Joseph. 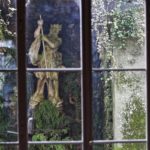 The dining room is perfectly in perspective with the hall, the tree-lined road, the bridge with the chapel and with the tiny back yard which houses a statue of the god Neptune. This perspective axis intersects with a series of axial doors to the adjacent rooms. The acquatic theme of the yard is connected with monochromes depicting the Four Rivers in the dining room. 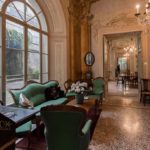 Into the sitting room, the frescos created by Natali were covered with decorations of fake wallpaper. The portrait of Andrea Ranzi is particularly interesting, he was a doctor and patriot from Pisa who fought in the battles of “Curtatone and Montanara” and his daughter married Gian Carlo Dosi, the one who planted the Libenese cedars. 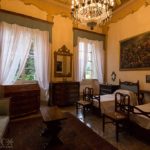 The bedrooms are decorated by prestigious paintings by the Neapolitan school among which is important to highlight Rest on the Flight into Egypt by Massimo Stanzione, which was exhibited during the “Civiltà del Seicento a Napoli” (Capodimonte, 1984) exhibition.

Find the next guided tour in our calendar >> CLICK HERE

X This site and selected third parties use cookies or similar technologies for technical purposes and, with your consent, also for other purposes as specified in the cookie policy. You can freely give, refuse or withdraw your consent at any time. You can consent to the use of these technologies by using the "Accept all" button or refuse or choose which categories of cookies to allow.
Cookie SettingsAccept allReject allPrivacy Policy
Manage Consent

This website uses cookies to improve your experience while you navigate through the website. Out of these, the cookies that are categorized as necessary are stored on your browser as they are essential for the working of basic functionalities of the website. We also use third-party cookies that help us analyze and understand how you use this website. These cookies will be stored in your browser only with your consent. You also have the option to opt-out of these cookies. But opting out of some of these cookies may affect your browsing experience.
Necessary Always Enabled
Necessary cookies are absolutely essential for the website to function properly. These cookies ensure basic functionalities and security features of the website, anonymously.
Functional
Functional cookies help to perform certain functionalities like sharing the content of the website on social media platforms, collect feedbacks, and other third-party features.
Performance
Performance cookies are used to understand and analyze the key performance indexes of the website which helps in delivering a better user experience for the visitors
Analytics
Analytical cookies are used to understand how visitors interact with the website. These cookies help provide information on metrics the number of visitors, bounce rate, traffic source, etc.
Advertisement
Advertisement cookies are used to provide visitors with relevant ads and marketing campaigns. These cookies track visitors across websites and collect information to provide customized ads.
Others
Other uncategorized cookies are those that are being analyzed and have not been classified into a category as yet.
SAVE & ACCEPT